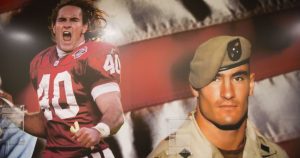 45 Second Rest Between Each Round

Choose a weight on the dead-lifts you can cycle through most rounds unbroken. There will be a 35 minute time cap on this workout and our goal is everyone chooses a weight that will allow them to finish under the time cap. On the pull-ups, use bands if you need them. The history of this workout and significance is copied below.

Patrick Daniel Tillman (11/6/76–4/22/04) was a professional football player who left the National Football League and enlisted in the United States Army in May 2002. He joined the Army Rangers and served multiple tours in combat before he was killed in the mountains of Afghanistan. He was a recipient of the Silver Star, the third highest honor in the military, and a Purple Heart. Pat is survived by his wife Marie. He is also remembered through the foundation named in his honor.

Founded in 2004, the Pat Tillman Foundation invests in military veterans and their spouses through academic scholarships – building a diverse community of leaders committed to service to others. The scholars chosen show extraordinary academic and leadership potential, a true sense of vocation, and a deep commitment to create positive change through their work in the fields of medicine, law, business, education and the arts.

This workout was originally posted on crossfitfootball.com as the workout of the day for February 7, 2015.